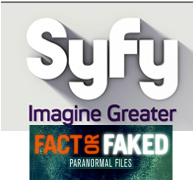 Featuring former FBI agent Ben Hansen, lead scientist Bill Murphy, journalist Jael de Pardo, tech specialist Devin Marble, stunt expert Austin Porter and photographer Lanisha Cole, Fact or Faked: Paranormal Files uncovers the truth behind supernatural and unexplained occurrences that have been caught on camera. In each episode, the team searches for the most intriguing images, videos and unnatural phenomenon found online and around the world. After selecting the most compelling cases, they head into the field, attempting to recreate the video, carrying out key experiments and questioning eyewitnesses. The team investigates all the clues and evidence with the most advanced techniques and tools at their disposal, and their objective is to answer the question, “Is this real?”

Syfy’s 31 Days of Halloween fright fest will culminate in the annual Ghost Hunters Halloween Live telecast on Monday, October 31 from 7PM-1AM/ET, hosted by Josh Gates (Destination Truth). This year, Jason, Grant and team members from both Ghost Hunters and Ghost Hunters International will head to Pennhurst Asylum in Pennsylvania, a sprawling maze of buildings constituting a former state mental institution.  Abandoned for decades, Pennhurst is now one of the country's most notoriously haunted locales.

Syfy is a media destination for imagination-based entertainment. With year round acclaimed original series, events, blockbuster movies, classic science fiction and fantasy programming, a dynamic Web site (www.Syfy.com), and a portfolio of adjacent business (Syfy Ventures), Syfy is a passport to limitless possibilities. Originally launched in 1992 as SCI FI Channel, and currently in more than 98 million homes, Syfy is a network of NBCUniversal, one of the world's leading media and entertainment companies.