April 27, 2011 Whaley Ghost House/Muck Monster
(Bill, Chi-Lan & Austin/Ben, Jael & Devin)
Photos of ghostly images taken at San Diego's Whaley House are scrutinized; a family's footage of a creature said to inhabit Florida's Loxahatchee River is examined.
April 20, 2011 Dashcam Chupacabra/Nightly News Alien
(Ben, Chi-Lan & Devin/Bill, Jael & Austin)
Footage of a chupacabra recorded by a Texas sheriff and DNA samples of a creature obtained by a local rancher are scrutinized; a newsreel of an alien walking behind a reporter in Argentina is examined.
April 13, 2011 Playground Poltergeist/Alien Intruder
(Bill, Jael & Austin/Ben, Chi-Lan & Devin)
A purportedly haunted swing set is investigated in Argentina; a Florida family claim to have met with aliens over the span of a decade.
April 6, 2011 Raining UFO's/Ectoplasmic Pic
(Ben, Jael & Austin/Bill, Chi-Lan & Devin)
Examining UFO footage taken by a police helicopter's night-vision camera; photographic evidence of ectoplasm taken by a surgeon in the 1920s is scrutinized
Mar 30, 2011 Fire In The Sky/Thermal Theater Ghost
(Ben, Jael & Devin/Bill, Chi-Lan Austin)
The team probes sightings of strange lights in the sky that were seen within days of each other over New York and Texas; footage of a ghost in the balcony of a Florida theater begets an investigation.
Mar 23, 2011 The Real Battle Of LA/Queen Mary Menace
(Ben, Jael & Devin/Bill, Chi-Lan & Austin)
-In the Season Two premiere episode “The Real Battle of LA / Queen Mary Menace,” the team investigates the mysterious case that many people believe marked the very beginning of UFO government cover-ups – the historic Battle of LA.  Only a couple months after Pearl Harbor – an enemy aircraft was reported over Los Angeles, and the city erupted into a fiery battle that lasted for several hours. But almost seventy years later, no one knows what the military was actually shooting at and the Fact or Faked team is determined to figure out if it was of extraterrestrial origin.  Ben, Jael and Devin head to one of the original gun batteries in San Pedro, CA to get the facts before recreating the epic battle using searchlights, grenade launchers and a 50-caliber machine gun.  Meanwhile, Bill, Chi-Lan and Austin spend the night on the haunted Queen Mary luxury cruise ship to test theories around the phantom figure that was caught lurking down the main deck hallway.  When Austin sees a pair of glowing eyes, the team realizes they’re not alone. 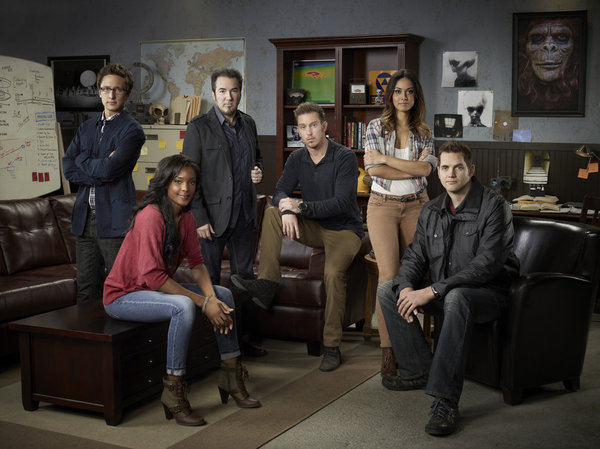